The Kondo is the Main Hall of Miidera, the head temple of the Tendaijimon sect of Buddhism. Originally built in the seventh century as a temple connected with Emperor Tenji (626－671), Miidera has been written into the annals of history for over 1,300 years, experiencing several violent disputes related to religious persecution, as well as seeing its buildings repeatedly succumb to fire and rise again from the ashes.
The current hall was rebuilt in 1599 by Toyotomi Hideyoshi’s legal wife, Kita no Mandokoro. It is renowned for its design and is seen as an important representative of Momoyama period (1573–1600) architecture. The dignified presence of the whole is given life and character by the unexpectedly light and beautiful cypress bark roofing.
The interior of the hall is divided into three spaces, chambers known as the gejin (outer sanctum), naijin (inner sanctum), and kojin (apse). The principal image is a statue of Maitreya enshrined in the center of the inner sanctum, a chamber constructed in a traditional style typical to Tendai esoteric Buddhist temples, with unique characteristics that include an earthen floor set one step lower without a floor board. The statue is kept hidden from public view.

The Tendaijimon sect is a Buddhist sect that respects Chisho Daishi Enchin (814–891), the fifth Tendai head priest, as its founder, and its head temple is Miidera Temple (Onjoji Temple) in Otsu City, Shiga Prefecture.
In the late 10th century, the disciples of Chiso Daishi broke away from the Tendai sect, the head temple of which is Hieizan Enryakuji Temple. From that event, two branches existed in the Tendai sect, thus the Tendai sect based in Mt. Hiei (Hieizan) became called the Sanmon branch, and the other, the Jimon branch.

A temple main building in which a principal image is enshrined. It is also called Kondo, Chudo, Butsuden, Mieido or Amidado, depending on the sect.

Emperor Tenji (626–671) reigned in the mid-seventh century. He conspired with Nakatomi no Kamatari to destroy the Soga clan and resolutely carried out the Taika Reforms as the crown prince. After his mother, Empress Saimei died in 661, he ruled without official accession. In 667 he moved to Otsunomiya in Omi Province (present-day Shiga Prefecture) and acceded to the throne in the following year. He improved internal administration by creating Kogo-nenjaku (family register) and enacting the Omi Codes. (Reigned 668–671)

A warlord in the Azuchi-Momoyama period. First, he served to Oda Nobunaga, and as soon as Nobunaga died due to the Honnoji Incident in 1582, he declared himself as the successor, defeated his enemies and unified the country. From 1583, Hideyoshi began the construction of Osaka Castle, the castle tower of which has a lavish five-story structure on the outside and an eight-story structure inside that was suitable for the supreme ruler. While he was called Hotaiko, luxurious Momoyama culture, including tea ceremonies and paintings of the Kano school, flourished.

Relations between Miidera Temple and Hideyoshi were generally favorable; however, in 1595, his later years, he suddenly imposed an order to Miidera Temple to confiscate all of the assets belonging to the temple. After Hideyoshi’s death in August 1598, Miidera Temple was restored by his legal wife, Kita no Mandokoro.

Generally, it used to refer to legal wives of nobles who were Sessho (a regent who acts on behalf of either a child Emperor or an empress regnant) or Kanpaku (a chief advisor for the Emperor). Later, it was used to call Kodai-in, the legal wife of Toyotomi Hideyoshi, in particular. After the death of Toyotomi Hideyoshi, she contributed to the restoration of Miidera Temple and reconstruction of the Main Hall. 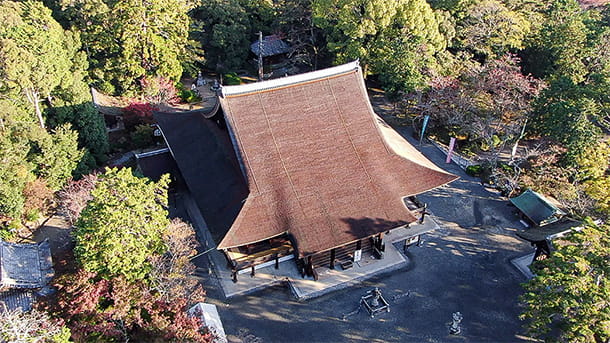 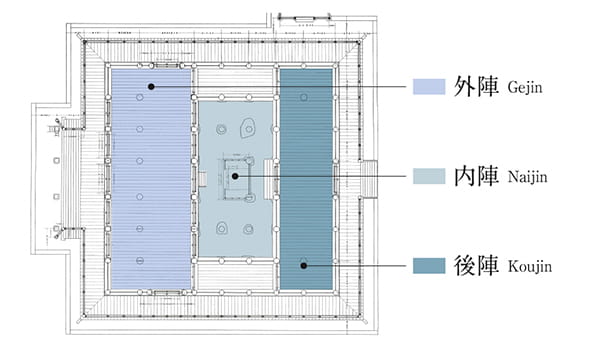 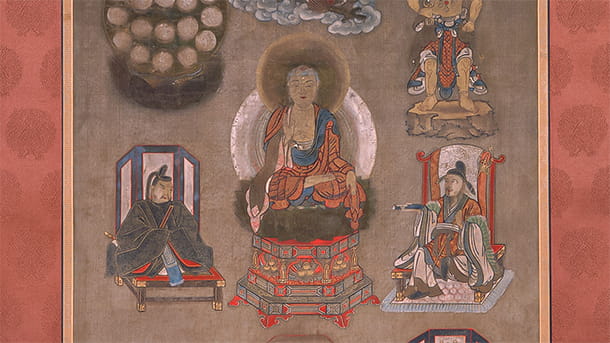 Maitreya is a bodhisattva who will be a successor to Shakyamuni Buddha. Maitreya lives in Tusita heaven and is a future Buddha. Five trillion and sixty-seven million years after the death of Buddha, he will appear on Earth to save all living things who have not been saved by Buddha entirely by preaching at three assemblies, Ryuge sanne.